Welcome to the newly redesigned website for the Music Time in Africa Archive! We are pleased to provide online access to over 600 digitized radio programs from the Leo and Mary Sarkisian Collection at the University of Michigan. This blog post is an overview of what you will find here.

In addition to this Blog, the Music Time in Africa Archive website contains three informational sections and a direct link to listen, browse, and read the radio programs.

The section “Access to Music Time in Africa,” illustrated with a lovely image of a spinning reel-to-reel tape recorder, provides information about getting to the Music Time in Africa radio programs of yesterday and today. The first link takes you to the listening platform. You can also link to the radio programs in the “Listen” link in the header of every web page. A second link takes you to the Voice of America’s ongoing digital broadcasts of Music Time in Africa. Heather Maxwell hosts the weekly hour-long program. The third link requires a University of Michigan login because some of the information there is not yet publicly available. The fourth link goes to an online finding aid for over 360 recordings that Leo Sarkisian made in Africa in the 1960s and 1970s. Eventually, we hope to make these recordings available through this website.

The section “Leo & Mary Sarkisian Collection” includes an illustrated biography of the “Music Man for Africa,” and an illustrated description of the audiovisual materials and musical instruments that are part of the Collection at the University of Michigan.

A third section is all about the sponsors who have made it possible for us to acquire, organize, and make available the Music Time in Africa tape recordings. In particular, we wish to recognize the ongoing support of the African Studies Center at the University of Michigan and a generous grant provided by the National Endowment for the Humanities.

In welcoming you to the new website, we wish to acknowledge and thank Walker Boyle for his technical creativity and perseverance in building and supporting the radio program delivery platform, which is now hosted by the University of Michigan School of Information. UMSI graduate student Jordan Gorzalski designed and built this website on WordPress.

We hope you enjoy exploring the rich content at this site. Let us know what you think by contacting us through the link at the bottom of the page. 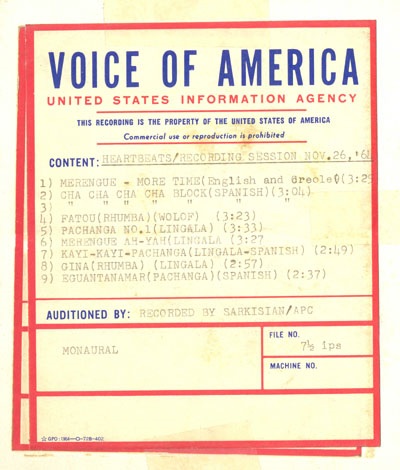 Music Time in Africa has been on the air for over 50 years. From the first program, broadcast in May 1965, through the program in June 2012, the one thing that stayed the same was the theme song. In 1964, program director Leo “Music Man for Africa” Sarkisian had two recording sessions with the popular group, The Heartbeats of Sierra Leone, in the Voice of America African Program Center in Monrovia, Liberia. According to former program host Matthew Lavoie, Leo first heard The Heartbeats play a set at the Ducor International Hotel and invited them to come to the studio to record. They produced sixteen tracks over the two recording sessions.

“Zamsi,” the song from which the nine-second Music Time in Africa opening theme jingle is taken, was one of two original songs recorded by The Heartbeats in Leo’s sessions. It was written by percussionist Francis Fuster. Check out the full recording of “Zamsi” by The Heartbeats on Matthew Lavoie’s blog post. We don’t think you’ll be able to get it out of your head!

Matthew Lavoie’s blog: a wealth of knowledge of African…

In preparation for this meeting, we perused the blog posts Matthew wrote during his tenure as host and found a treasure trove of interesting and rare African music from the Leo Sarkisian Library at the Voice of America. Each blog post is centered around a selection of music with a theme and contains information about the genre of music, the performers, and the particular recordings featured. The blog post comments are full of African music enthusiasts making requests and asking further questions about the featured pieces.

Matthew put many hours of research into each blog post, finding out as much as possible about the music and artists featured. When possible, he tracked down the artists or people who knew more about the music and interviewed them to get more information for the blogs. We learned from our interview that Matthew greatly enjoyed writing these blog posts, because they provided him with an opportunity to share African music that he did not have the time to feature on Music Time in Africa.

Everyone’s favorite music man, Leo Sarkisian, is celebrating his 96th birthday today! Wishing Leo another wonderful year full of music, art, and (of course) his beloved Mary. In celebration of Leo’s birthday, here are five facts you may not know about him:

1. While employed by Voice of America, Leo created chalk sketches of public figures, musicians, and locals he met throughout his travels in Africa. Most of his sketches are currently in the collection of the Gallery Miriam in South Africa.

4. Leo not only recorded music but dabbled in playing musical instruments himself. Among his repertoire are the lute, bamboo flute, santur (dulcimer originating from Iran), and kanun (stringed instrument most often played in the Middle East, Central Asia, West Africa, and Eastern Europe). At one point, Leo played kanun music at the Library of Congress and Smithsonian Institution.

5. Leo is also well-known for his dancing ability.

Ethical Access to Music Time in Africa is off to a good start.  The project started on June 1, 2016.  The First Quarter Status Report, 30 Sept 2016 summarizes the work done to recruit student staff, set up the project, and undertake the detailed work required to identify and process at least 900 sound recordings from the Voice of America’s long-running radio program Music Time in Africa.

By the end of the first quarter, we have found, logged, and shipped to The Media Preserve over 750 radio programs.  The vast majority of the recordings consist of full 30 -minute programs, along with the associated reading script for the program.  The recordings typically start with a spoken welcome and theme music.  The program then features between 4 and 8 musical selections on a particular topic with the selections introduced and explained by the announcer.

The First Quarter Report concludes with a list of goals for the next quarter of the project.

The University of Michigan’s project, “Ethical Access to Music Time in Africa,” is a featured project on “Tune In Tuesdays,” a blog series by the National Endowment for the Humanities highlighting NEH funded projects that preserve and provide access to audiovisual resources.  The blog post is a lead in to a one-day symposium on audiovisual preservation held on 30 September 2016.